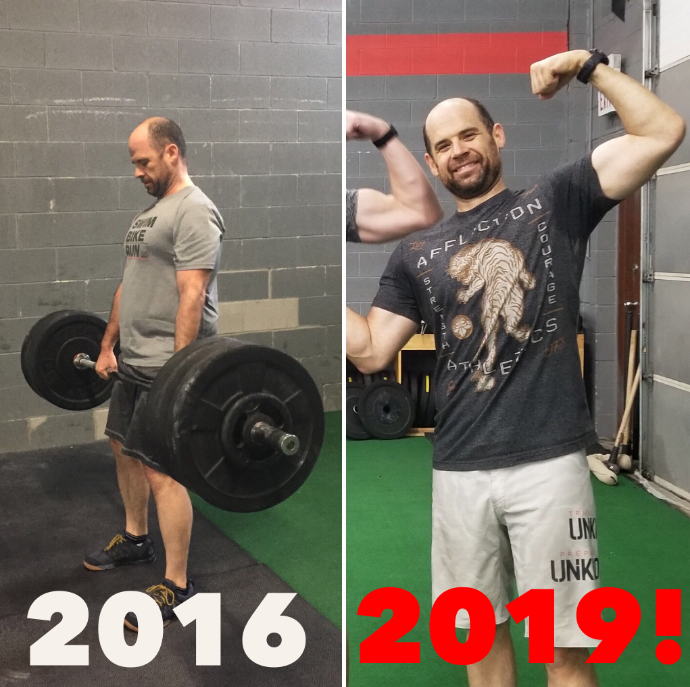 Meet Cavin. He’s been training with us since late 2016 and is one of our amazing members that loves endurance activities! Cavin came to us with a goal of getting back to his former self and competing in triathalons again. From day one in On-Ramp you could tell Cavin was determined to reach his goal, and in late 2018 he won our first ever Lean+Clean challenge!

“In my thirties, I hated the traditional gym. I lived/breathed endurance activities – countless triathlons, half Half IronMans, Full IronMan, half marathons, etc. That was until I pushed myself to the point of injury. After numerous attempts to regain form, gaining 40 pounds, I knew then I had to change it up. I had heard of Crossfit in passing, but always thought it was for the super fit. That’s when I contacted CrossFit Canuck about doing a free trial. When I went in, I realized that this WAS for everyone. So I signed up! After a few years of doing Crossfit, I can honestly say I’m in better shape now in my forties, then I ever was in my thirties when I was training and doing the IronMan races.

The workouts are never the same, and each movement can be modified based on skill level and abilities. With the guidance from the coaches, it has pushed my limits and I am doing things I never thought I’d do! 2019 is my comeback year for a triathlon. I full confidence I can perform just as well as I did in my thirties – Thank you Canuck!”

We couldn’t be prouder to be a part of Cavin’s comeback journey! We can’t wait to see his results when he returns to competitive running this season!